by Aodhan MacCathmhaoil
Environment, How To Guide, Innovations, Know-How, Recycling 0

Carbon footprint waste management: many industries and consumer goods sectors are seeing an increased drive towards the goal of carbon-neutral services. Or, they at least see efforts in offsetting the carbon and greenhouse gas impact of commercial activities.

We are getting used to seeing ads on websites such as airlines when we book our flight tickets or hotel bookings. The growth in the sector is even leading to concepts such as carbon-neutral hotel stays.

In today’s blog, we will discuss an option we have that lets customers minimise carbon footprint waste management impacts by planting trees in Australia. In addition, we also provide you with a calculator to help you offset your carbon footprint.

A bit about how Waster works

Waster offers a real alternative to waste and recycling for small and medium Australian businesses through flexible 30-day agreements and no hidden fees. Please check out our prices and services by pressing the blue button below:

Carbon and greenhouse gas emissions from landfills are a serious concern in Australia and globally. As stated by Wikipedia:

“Landfill gas is a complex mix of different gases created by the action of microorganisms within a landfill. Landfill gas is approximately forty to sixty per cent methane, with the remainder being mostly carbon dioxide. Trace amounts of other volatile organic compounds comprise the remainder (<1%). These trace gases include a large array of species, mainly simple hydrocarbons.” 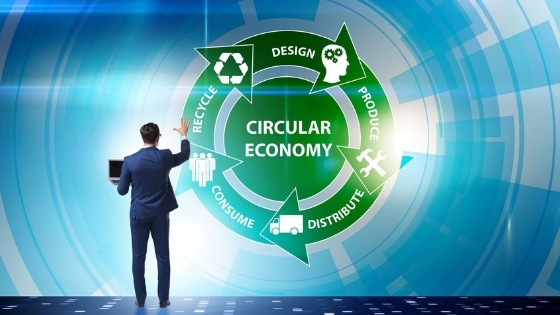 The gas is basically produced by the decomposition of organic compounds in the landfill. Landfills are a large source of human-made methane emissions – the third-largest in the US, for example. Numerous recent landfills have introduced gas capture technology to utilise this gas to power electricity generation.

In this regard, in Australia, examples include the SITA Smartcells.

This facility claims that “The site provides green energy to over 2,000 homes across the City of Casey. This energy is produced from biogas captured onsite, converted into electricity and then fed back into the powergrid, providing significant environmental benefits including reduced greenhouse gas emissions and less reliance on fossil fuels for power generation.”

Waster seeks to do its part by promoting recycling wherever possible. Take a look at our blogs on food waste disposal and bottle and cans recycling.

The information on how much C02 and other greenhouse gases can be saved by recycling is tricky for numerous reasons.

It is hard to estimate how much C02 is produced in the manifacturing or recycling process. When waste is disposed off in landfill, it breaks down and releases mostly methane, which is believed to be a more potent greenhouse gas than carbon dioxide.

However, many modern landfills burn this gas to produce energy – a process that grows all the time through the usage of biogas. Some people even argue that landfills could turn into the power stations of the near future, powering our cities on rotting food.

“Recycling one aluminium can, for example, saves over 95% of the energy that would be required to produce a can from all new materials.

“Recycling paper allows more trees to remain standing, whereby simply growing larger they actively work to remove carbon dioxide from the atmosphere and “sequester” – or capture – it in their wood.

“This natural process called “carbon sequestration” cleans GHG emissions from the atmosphere and helps combat global climate change. Together with energy savings, this benefit can add up! By recycling its office paper for one year, a business with 7,000 employees reduces its GHG emissions by 570 metric tons of CO2e. This is like taking 370 cars off the road for an entire year!”

Can you consider paying more for carbon footprint waste management?

Helping the environment by just paying and not having to exert effort sounds real good, right?

Some may even question its legitimacy, that is for sure.

One example would be the album of Coldplay back in 2004. The album was called “A Rush of Blood to the Head.” They were all for the environment, as they had reportedly offset the carbon emissions produced by the making of the album. They had 10,000 mango trees planted in India, as a result.

Unfortunately, it was reported that many of the mango saplings died just a few years later. Reasons for this were that the promised water and money to the villagers never arrived, at all. That begs the question: Is carbon offsetting really worth it?

The answer: It is. You just have to make sure that the money you donate is going to a legitimate provider.

Would (or should) you pay to offset carbon on your waste and recycling services?

Whilst offsetting carbon emissions on services such as flights is increasingly common, it is only beginning in services such as waste management and recycling. That, of course, would play a large role in moving your business to true environmental sustainability.

Most major waste management businesses in Australia promote their environmental credentials and how their landfills can save greenhouse gases from entering the atmosphere. Some smaller businesses are promoting carbon-neutral collections (e.g., Greenwheel in Melbourne).

As mentioned above, Waster has partnered with Greenfleet, Australia’s first carbon offset provider established in 1997 to offer Aussie motorists a tree planting programme to offset emissions. When a customer donates to plant a tree, we match that donation.

By donating $4.02, which Waster will match, you can offset 0.54 tonnes of CO2 through planting native Australian trees, which have numerous other benefits.

The big question from our perspective is whether people are willing to pay a little extra to have carbon-neutral services. We would like to hear your opinions on this as we could potentially offer an all-inclusive fee (with carbon offsets included). Tell us what you think!

Every year, we think of Christmas solely as a time of enjoyment and getting together with loved ones – sometimes even with close friends. No one would even think of recycling, much less offsetting carbon during this time of the year.

However, a lot of concerned waste companies (including us) and environmentalists would relish the idea of helping the environment at all times – Christmas included. One idea that popped into our minds is planting Christmas trees during this season. Would this help push people to offset their carbon footprint? Do take note that this is not limited to only Christmas trees and season, but also the whole year, planting trees of all types that can help with carbon footprint waste management.

Can a Christmas tree inspire you to arrange carbon neutral waste management?

Waster has partnered with Greenfleet to plant Australian trees and help reduce emissions in the atmosphere, as well as all the other great benefits such as protecting native habitats, etc. To further help, Waster has also decided to match the donation. You can see more information on Greenfleet here.

How much would carbon neutral waste management cost a business?

The basic principle behind a carbon-neutral waste management service is pretty straightforward. You basically would plant enough trees to counteract the emissions at landfill from your waste.

Obviously, the complications in calculating how much carbon you need to absorb are difficult. It also pretty much depends on your waste, location, which landfill you use and how the waste breaks down in the landfill. For example, landfills release methane which is a much more potent greenhouse gas than carbon.

Read this for a better understanding: what if we take a small business that has one 240-litre wheelie bin collected every week?

According to the website Watch My Waste, which can calculate any carbon offsetting concerns, this would produce c.750kg of waste per annum – 60kg per metre or 14.4kg of waste per bin.

This equates to c.1500kg of CO2 emissions per annum.  Through Greenfleet, this carbon can be offset by planting trees costing $22.50.

This is certainly a potential cost for many businesses, right?

Carbon footprint waste management: a calculator to give you an idea

If you have ever wondered about carbon-neutral wastes services – how difficult it would be to make your business waste and recycling carbon neutral – then, you should check out our online calculator.

You will be able to plug in your bin sizes and frequency and see how much CO2 you produce each year. You can also check how many trees you would need to plant to neutralise this CO2.

We, of course, also need to mention the ongoing problems the Earth experiences – deforestation.

There have been certain accounts that stated that, instead of helping store carbon dioxide, trees are huge sources of carbon emissions. Last 2017, researchers shared that tropical forests located in South America, Africa and Asia release an astounding 425 million metric tonnes of carbon yearly.

Unfortunately, the main root for this is deforestation. Consider this possibility:

Think of a certain forest, any forests in the world you can think of. And imagine forests as sort of like a sponge absorbing water, which instead soaks carbon dioxide. We all know that at some point, the sponge will absorb too much and will reach its limit, leaking out the excess water, as a result.

The same is true for forests. Trees do have limits on the amount of carbon dioxide they can absorb. This results in unabsorbed carbon still lingering in the air, all the while trees releasing carbon, too. Few trees cannot handle too much carbon all at once. And all of this is due to deforestation. Additionally, more carbon is emitted once trees die and decompose. What can we do about it?

“All we have to do is plant trees, right? Pfft, that’s easy! We can just organise tree planting projects,” as stated by some of my colleagues when talking about this issue.

“But it’s not that easy to replace so much trees in so little time!” I said.

When a tree reaches 40 years old, it absorbs and cancels out about 1 tonne of carbon dioxide. That is a huge amount of carbon dioxide. But, we also have to consider the fact that average human activity emits about 40 billion tonnes of carbon dioxide in the air every year. How many trees do we have to plant to offset my – or our – carbon footprint?

In theory, we have to plant about 40 billion trees every year to counter this. Only after 40 years would the originally planted trees cancel out the now-increased carbon dioxide levels emitted into the atmosphere. And we also have to consider the fact that the land we have to support trees is also limited. Are there any other ways to reduce carbon emissions on the environment?

What can we do, then?

Although planting trees prove to be beneficial in absorbing and cancelling out carbon dioxide emissions, we also have to find other ways we can reduce it. Here are some ways, both big and small (but can still make a difference), we can help:

Carbon footprint waste management is not as simple as it seems. A lot has to be taken into consideration and require effort and dedication to pull it off. It may cost a bit for business, but it also has a lot of upsides not just for the business itself, but also the environment.

Judging from the statements above, more work needs to be done, especially on planting trees to offset carbon. We are very excited to see what changes await us in the next couple of years.