Non Plastic Condoms: You know what else is important aside from protecting the environment? Protecting yourself from STD and practising safe sex, of course!

But how do these completely different subjects go hand-in-hand, anyways?

Well, they do because of the products used. This mainly involves the use of condoms to practice safe sex, but what happens after using and disposing of it?

I know many of you readers want to partake in living an eco-friendly lifestyle. Can that maybe include birth control? Answer: of course it does! This leads me to the question “are condoms recyclable?”

See our blog on why recycling is good for the economy in order to better understand the blogs we do.

Before I continue with the blog on non plastic condoms, I have something to discuss first.

Like some other blogs here on Waster, we make it a point to introduce ourselves first to you and share with you what we do and what we offer.

Waster caters to small and medium businesses all throughout Australia. We provide high-quality waste management and recycling services.

So, what are you waiting for? Click the blue-button below to learn more!

Now, back to the blog.

Are Condoms Made Of Plastic?

As this is about a discussion of non plastic condoms, we should also properly discuss plastic ones, as well, in order to comprehend the blog more.

But let’s talk about the polyurethane condom.

As opposed to biodegradable latex and lambskin condoms,  polyurethane condoms mainly consist of plastic materials. Even though it is plastic, it should not be placed in your recycling bin along with plastic bottles and other materials. 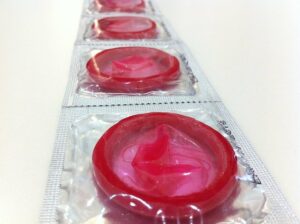 If you’re asking why polyurethane condoms shouldn’t be placed in your recycling bins, that is because they are not biodegradable at all.

Additionally, as stated by a mywaste blog, the best way to properly dispose of plastic condoms is to wrap it in tissue and throw it in your garbage bin.

Many of you might be wondering if a used condom is recyclable or not. Unfortunately, it cannot be recycled.

That means you can only use them once – and never again.

What better way to reduce used condoms going into landfill and create a sustainable environment than to create non plastic condoms, right?

Let me mention something that may pique your interest.

Have you heard of the vegan condom phenomenon that made its rounds on the internet just a little while ago?

Owned by German entrepreneurs Philip Siefer and Waldemar Zeiler, they launched a company called Einhorn (meaning a unicorn, in German) with one thing in mind: to create sustainable and non plastic condoms.

“What makes up the non plastic, vegan condom?” you might ask. Usually, a condom is made out of latex and casein protein. But the company Einhorn doesn’t opt to use the casein protein. Instead, they use a natural plant-based lubricant.

“We kept hearing the same question from people who were donating money,” Siefer says. “Are the condoms vegan? We didn’t even realise ourselves that condoms usually contain an animal protein to make the latex softer,” he added.

Although the non plastic, vegan condoms are fairly new in the market, Einhorn stated that people ages 20-40 years old usually are the ones to buy the non plastic condoms, with 60 per cent of the purchasing coming from women.

Zeiler stated that “Everyone has a connection to sex but condoms are still being sold as medical products. The guys in charge of selling these don’t know who’s using them. They’re all like 65 and I don’t think they have sex anymore. Now, this shows how interested they are in who uses their products”.

Take note that Einhorn isn’t the first company to create a sustainable, non plastic, vegan condom. North American brand Glyde already did that back in 2013. Their condoms are made of natural latex extracted from renewable plantation trees.

See our blog on sustainable packaging.

A piece of truly refreshing news, am I right? But it doesn’t end there, let me discuss with you further details about it. An excerpt from Einhorn’s official website, titled “Our Vision” stated the following:

“Fairstainability doesn’t mean just collecting different certifications and eco-labels. We’re on a mission to integrate the fairstainability criteria to the whole life cycle of an Einhorn condom – from the latex plantations to customers – to make it as fairstainable as possible. We know it is a long term project, but we also know it starts with taking action, step by step: creating fair working conditions for everyone involved in the value chain, researching and increasing the biodiversity in the plantation, preventing the use of harmful pesticides, keeping the CO2 emissions as low as possible…”

Let me break it down further for you.

We discussed a while ago that condoms, either plastic or non plastic, usually consist of latex, right? Well, did I also mention that they get that from extracting rubber trees?

See where I’m going there? Extracting from rubber trees has resulted in deforestation for the last 30 years, which impacts the natural habitats of wild animals up to this day.

In order to fight this, Einhorn decided to hire and work with a group of smallholders in Thailand.

These Thai farmers do not use pesticides, choosing to remove weeds via tools, instead. They aim to have a chemical-free work environment one day. Also, the farmers are paid 15 per cent above the minimum wage (which is very nice to hear!).

Plastic condoms are impossible to recycle as they are not biodegradable, so dispose of them properly.

Thankfully, sustainable and non plastic condoms are on the rise! (no pun intended)

Who knows, in the future, we might see even more crazy innovations.

See our blog on recycling symbols in Australia and New Zealand to learn about recycling more. 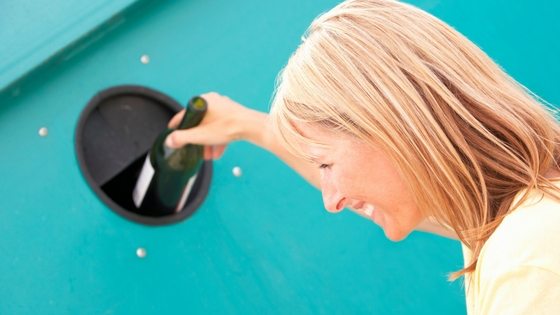