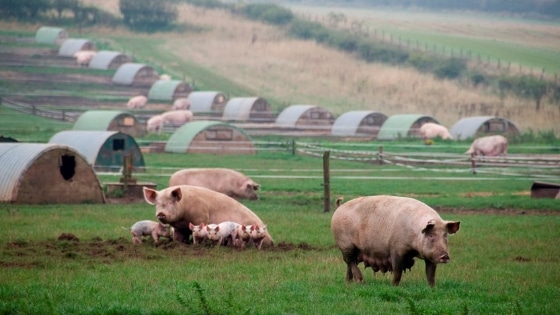 Animal Feed From Food Waste Process 🐖: nearly every developed country wastes huge amounts of food. In fact, the ABC even reported that Australia wastes approximately 40 per cent of the food that it produces. This comes from many reasons such as supermarkets or other food establishments throwing away unsold food to households throwing out uneaten food.  In today’s blog, we will look at the potential of creating animal feeds from food waste processes.

The problem is huge and vast amounts of perfectly fine food are simply thrown away.

“‘If we look at the potato industry, 40 per cent of the produce is thrown out, which is mostly because of cosmetic standards,’ Dr Lapidge said.”

Whilst lots of food such as fruit and vegetables are provided to farms as animal stockfeed, there is still potential to expand these programmes to prevent food waste from ending up in landfill. You can learn more about this by viewing our blog on green waste recycling for leaves, grass clippings etc.

We have also covered other aspects of food waste in our blogs on biogas and energy generation.

Waster provides low-cost waste and recycling solutions to small and medium Aussie companies. Furthermore, we provide every type of recycling, general waste and grease trap cleaning on flexible 30-day agreements. So, that means you never have to worry about hidden charges or rollover clauses again.

Waster currently works with a number of food production businesses to provide the waste food to stockfeed operations (i.e., providing animal fodder). You can check out and learn more on this through our article on whether use by food can really be eaten.

This is for clean vegetables, etc. So, that means no meat or animal products involved.

The benefits of this type of operation are pretty clear. Below, we will enumerate the benefits of using animal feed from the food waste process.

Is there potential for expansion of these programmes – turning food waste into animal feeds?

There are lots of moves to increase food provision for animal swill. Woolworths, for example, has increased its stock feeding programme:

“The program has been running nationally for over 10 years and, to date, over 600 farmers and community groups from around the country have joined, using surplus food for stock feed and on-farm compost.

“The program has also helped Woolworths record a year-on-year reduction of 8 per cent in food waste sent to landfill over the past three years.

“Adrian Cullen, Woolworths Head of Sustainability said the program was a great way for farmers and community groups to get a hold of additional feed for their livestock or use the material for composting free of charge.”

How to turn food waste to animal feed

Basically, normal people or businesses can chime in and donate their kitchen and plate leftover food to farmers. In turn, the farmers can use the kitchen and plate leftover food to feed their livestock. As for those who also own animals, they can use their leftovers to feed their own animals to not waste food. Pigs, in particular, are animals that can eat almost anything, so choosing what to feed them will not be too much of a problem.

With that said, it is still a much better option to know and regulate what to feed to animals. Not knowing and regulating can lead to a number of health problems for the animals. Worse, it might lead to a disease outbreak, which has already happened. Below, we share with you the news.

Clean standards and precautions are needed

It is vital to make clear that only certain foods can be provided to animals. Lack of regulations – or simply not following legislation – can lead to terrible consequences such as the BSE crisis in the UK or the outbreak of foot and mouth in Britain in 2001.

“The outbreak began on Burnside farm, Northumberland, where uncooked swill – food leftovers – were illegally fed to a barn of pigs. Under the regulation at the time, food wastes had to be cooked to sterilise them and prevent disease transfer. This was the first step in a series of unfortunate events which led to the costliest animal epidemic the country had ever seen.”

Numerous studies show that recycling food waste as swill is better for the environment than using it as biogas or compost. As long as the food is high quality, healthy and suitable for the animals, it makes perfect sense.

After the Foot and Mouth outbreak, Britain banned pigswill from recycled food waste. However, other countries went in the opposite direction. Now, countries including South Korea and Japan use around 40 per cent of national food waste for animal fodder.

“Farmers use swill not because of its environmental benefits, but because it reduces their feed costs by 40-60%. They have achieved these remarkable results through a science-based approach to swill feeding; swill manufacturers in Japan and South Korea must be registered and their compliance with food safety regulation is monitored. Food wastes are treated for three minutes at 80°C, or 30 minutes at 70°C – both enough to deactivate viruses such as foot-and-mouth. Since the introduction of these regulated systems, no disease outbreaks have been associated with swill feeding in these countries.”

Sensible usage of food waste for stock feeding of animals (animal feed from food waste process) has to play a part in tackling our food waste issues. Moreover, sensible legislation and treatment of food waste are vital to ensure health, safety and animal welfare.

There is no sense at all in throwing perfectly healthy food into landfill and then having farmers pay good money for fodder. We can definitely do better than that!